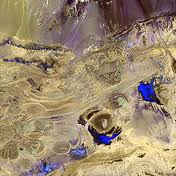 Dasht-e Kavir (دشت كوير in Persian), also known as Kavir-e Namak or Great Salt Desert is a large desert lying in the middle of the Iranian plateau. It is about 800 kilometers (497 mi) long and 320 kilometers (198 mi) wide with a total surface area of about 77,600 square kilometers (~30,000 mi²), making it the world's 23rd largest desert[2]. The area of this desert stretches from the Alborz mountain range in the north-west to the Dasht-e Lut ("Emptiness Desert") in the south-east and is partitioned between the Iranian provinces of Khorasan, Semnan, Tehran, Isfahan and Yazd. It is named after the salt marshes (kavirs) located there. Climate and structure The Dasht-e Kavir's climate is almost rainless and the area is very arid. Temperatures can reach 50 °C in summer, and the average temperature in January is 22 °C. Day and night temperatures during a year can differ up to 70 °C. Rain usually falls in winter. The desert soil is covered with sand and pebbles; there are marshes, lakes and wadis. The hot temperatures cause extreme vaporization, which leaves the marshes and mud grounds with large crusts of salt. Heavy storms frequently occur and they can cause sand hills reaching up to 40 m in height. Some parts of Dasht- e Kavir have a more steppe-like appearance. Wildlife Vegetation in the Dasht-e Kavir is adapted to the hot and arid climate as well as to the saline soil in which it is rooted. Common plant species like shrubs and grasses can only be found in some valleys and on mountain tops. The most widespread plant is mugwort. The Persian ground jay is a bird species living in some parts of the desert plateaus, along with Houbara bustards, larks and sandgrouses. Persian gazelles live in parts of steppe and desert areas of the central plateau. Wild sheep, goats and leopards are common in mountainous areas. Night life brings on wild cats, wolves, foxes, and other carnivores. In some parts of the desert, the Persian onager ("gur" in Persian)and sometimes even the Asiatic Cheetah can be seen. Lizards and snakes live in different places in the central plateau. Cultivation The extreme heat and many storms in Dasht-e Kavir cause extensive erosion, which makes it almost impossible to cultivate the lands. The desert is almost uninhabited and knows little exploitation. Camel and sheep breeding and agriculture are the sources of living to the few people living on its soil. Human settling is restricted to some oases, where wind-blocking housing constructions are raised to deal with the harsh weather conditions. For irrigation, Iranians developed a sophisticated system of water-wells known as "Qanats." These are still in use, and modern globally-used water-revenue systems are based on their techniques. Features Central in the desert lies the Kavir Buzurg (Great Kavir), which is about 320 km long and 160 km wide. In the west, a salt lake called Darya-ye Namak (1800 km²) can be found. It contains some large salt plates in a mosaic-like shape. It is part of a 4,000 km² protected ecological zone, the Kavir National Park. One of the most desolate places of Dasht-e Kavir is the Rig-e Jenn. See also Dasht-e Lut Geography of Iran International rankings of Iran List of deserts by area References ^ "NASA - Dasht-e Kavir, Iran". www.nasa.gov. Retrieved 2009-10-09. ^ Wright, John W. (ed.); Editors and reporters of The New York Times (2006). The New York Times Almanac (2007 ed.). New York, New York: Penguin Books. p. 456. ISBN 0-14-303820-6. from: www.wikipedia.org
Send date: 1389/6/9
Visit count: 3589
persiadesert
Design and production: Idea Tolue Software