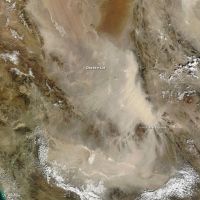 Pale tan dust billows over the Dasht-e Lut in eastern Iran in this photo-like image from the Moderate Resolution Imaging Spectroradiometer (MODIS) on NASA’s Terra satellite. In the thickest part of the storm, the dust cloud blurs the texture of the land beneath it, revealing instead the texture of the air in waves and lines. The most distinctive waves surround Kuh-e Bazman, a 3,489-meter (11,450-foot) tall volcano, which rises above the dust cloud. The ripples in the dust are a reflection of turbulence created as air flows around the peak. The dust seeps into the valleys of the mountains south and east of the volcano. The Dasht-e Lut, is a large salt desert in remote eastern Iran. The dust storm blows across the southern desert, leaving clear the distinctive orange dune fields and wind-swept lines in the north. The image was captured on January 23, 2010. The highest resolution version of the image (250 meters per pixel) is provided here. The image is available in additional resolutions from the MODIS Rapid Response System. from: earthobservatory.nasa.gov
Send date: 1389/6/10
Visit count: 4788
persiadesert
Design and production: Idea Tolue Software