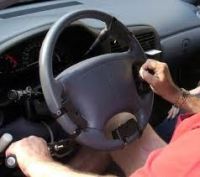 To take your car into Iran, or in order to drive in Iran you will need: • International driving permit or your national driving license; • Car registration papers. • Nationality plate or sticker. • Red warning triangle. • A set of spare bulbs and some basic spare parts. DRIVING REGULATIONS: As elsewhere in Europe or America, drive on the right, overtake (pass) on the left, yield right-of-way to all vehicles coming from the right (except on roundabouts/traffic circles) unless otherwise indicated. SPEED LIMITS: You can easily take 100 km as a unit of measurement since you can keep up fairly fast and steady speeds. Driving is much less tiring than on traffic-ridden European roads. But watch out for speed limits: 110km/h on motorways. 80km/h during the day and 70km/h at night in built-up areas. ROAD CONDITIONS: The road system has considerably improved during the past few years and road work is still continuing. When roads are wet, all speed limits are reduced by at least 10km/h. According to the latest official statistics available, there are 151, 488 km of various roads in Iran, of which nearly 1,500 Km are freeways and main roads and about 1,500 km in the category of wide, first -class, ordinary and second-class roads. The remaining length belongs to rural, paved, and dirt access roads. The motorways belong to the government, with insignificant tolls according to the vehicle size and distance travelled. Officials hope the private sector will be encouraged to invest in the future road development projects, under a new law passed in 1988. All amenities (restaurants, toilets, service, station, etc.) are available along most motorways and national roads. PARKING: In the centers and crowded areas of large towns, some street parking is mastered. There is a "limited traffic zone" in Tehran into which only certain vehicles are allowed to enter from 06:30 a.m. to 05:00 p.m. Fines for parking violations are heavy; in serious cases your car may be towed away or have a wheel clamp attached. Also, there are parking lots along all freeways and main roads, which are added to the main body of the road shoulder. BREAKDOWNS: In case of accident or breakdown, switch on the flashing warning lights, place a warning triangle 50 m behind your car, and call the Road Police (either through telephone on freeways or by asking the first truck which passes by, to call the Road Police in the nearest town or village). Although most large European, American, and Japanese car manufacturers are represented in Iranian cities, having some basic spare parts in the car will save you a lot of time and money. Most people agree that Iranian workmen, apart from being ingenious and willing to help foreigners whom they consider as their own guests, are skillful and conscientious. But this does not do away with the need for a final check-up especially in cases of complicated repairs. SIGNPOSTS: Signposting is very good, especially along major roads. Every two, five or ten kilometers, rectangular white, green or dark blue signposts show in Persian and English, either the distance to the remotest large city. Since the signposts are bilingual, signpost watching is an excellent way of learning to read Persian letters and numerals. Nearly all cities (with the exception of Tehran, Esfahan, and Shiraz) are labyrinths within which a tourist has the greatest difficulty in finding the way out. To avoid this, and if you don't want to see the town, you can use the ring roads which have been built around nearly all cities and towns in recent years. FUEL AND OIL: Filling stations are fairly frequent and are shown on the road and city map. It is as well to take a jerrycan although you will probably not use it often. It is however a wise precaution to fill up in the last town before a long desert lap. Fuel is available, in super (98 octane) and normal (90 octane). Lead-free fuel is also available, but don't expect to find it at every village pump. All grades of motor oil are on sale. Service station attendants expect to be tipped. At most filling stations, the needle on the dial shows the quantity supplied and not the price, which is incomparably lower than that in Western Europe. from: salamiran.org
Send date: 1389/6/11
Visit count: 3055
persiadesert
Design and production: Idea Tolue Software