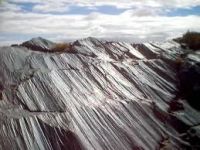 The Rig-e Jenn is a vast area of sand dunes in the middle of Dasht-e Kavir, Iran's central desert in the border region of the Semnan and Isfahan provinces. It was not travelled by the oldcaravan travellers, who believed it is a place where evil spirits live. Even today some in the neighbouring towns and villages believe this. Sven Hedin, the famous desert explorer avoided this area in his 1900s explorations to Iranian deserts. Alfons Gabriel crossed the southern 'tail' of it on his way from Ashin to Aroosan in the 1930s. From: wikipedia
Send date: 1389/6/17
Visit count: 3664
persiadesert
Design and production: Idea Tolue Software