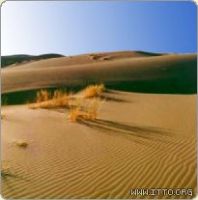 his national park is to the west of the central desert of Iran and east of the ‘salt Lake’. This area in general has a valuable flora and fauna reserves as well as a variety of wildlife. Ancient, historical monuments such Shah Abbasi caravansary (Bahram Palace) and the remnants of Haram Khaneh and Ainol Rashid are also present in this region. The most famous wild life species found here are: wild ass, ram, wild sheep, wild goat, panther, gazelle, wild cat, hyena, wolf, jackal, desert fox, fox, hare, porcupine and sable. The waterfowls which may be mentioned in this vicinity are flamingo, geese, duck, eagle, pheasant and crane. The Kavir National Park has a main route via Varamin through Pishva, Qal'eh Boland Villages, Asgar Abad and Hesar Goli which goes to Mobarakeh and finally reaches the Shah Abbas Caravansary. There is another roadway from Masileh which requires a guide.